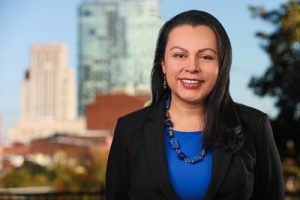 Sandra joined the Duke community in 2014, serving as the Project Launch Program Coordinator at Duke TIP where she advocated for gifted students with financial need. She most recently served as an Assistant Director at the Duke University Career Center where she provided career advice to undergraduate students, served as the primary expert on education, government, law, and non-profit careers, and supervised the Career Ambassador Team. She advises Define American and co-advises Duke Partnership for Service. Previously, she served on the Central Park School for Children’s Board of Trustees. She holds an M.Ed. in School Counseling from UNC Chapel Hill and an MA in Latin American Studies from Vanderbilt University.

Prior to working for Duke, Sandra was a school counselor in Chapel Hill-Carrboro Schools. Before moving to beautiful North Carolina she worked as a community-school partnership coordinator in Boulder, Colorado and as the Coordinator of International Programs at the CEDEI Language Institute in Cuenca, Ecuador. Sandra grew up and studied food industrial engineering as an undergraduate student in Arequipa, Peru. She has a love of experiencing world cultures, foods and languages and is fluent in Portuguese, Spanish, and English. Outside of work, Sandra loves exploring Durham and the world with her family.